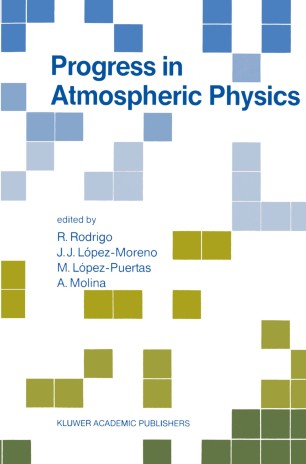 This book contains some of the papers presented at the 15th Annual Meeting on Atmospheric Studies by Optical Methods which was held in Granada, Spain, from Septe~ber 6 through September 11, 1987 and hosted by the Instituto de Astrofisica de Andaluda of the Consejo Superior de Investigaciones Cientfficas (Spanish Higher Res~arch Council). Fifty scientists from 14 different countries attended the Meeting. A number of review papers were invited but the participants were also allowed to submit the papers of their own choice. The final program was organized in 7 sessions devoted to different scientific subjects of Atmospheric Research. Many thanks are due to Drs. D.J. Baker, D.R. Bates, R.G.H. Greer, E.J. Llewellyn, T.G. Slanger, F.W. Taylor and G. Witt who served as chairmen of the sessions during the Meeting and contributed greatly to its success by carefully directing the discussion period in a stimulating manner after each lecture. We wish to thank the referees who have been so helpful with careful and fruitful comments to improve the quality of the papers published in this book. The scientific program was divided into three parts: Aeronomy, Atmospheric Emissions, and Aurora and Instrumentation. Detailed programs for these sections, and their subsequent editing, were the responsability of the undersigned. Some of the authors presenting papers at the Meeting declined the invitation to publish their manuscripts in the present book for different reasons. Our thanks to all of them for their attendance and presentation.