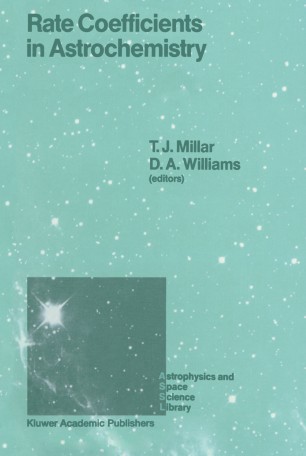 ''An atteJDpt has been made to cOll1PlJte the numbers of certain JI10lecules in interstellar space , . . . . A search for the bands of CH, O/{, DR, en and C2 would appear to be proIDising" P Swings and L Rosenfeld Astrophysical Journal 86,483(1937) This may have been the first attempt at modelling interstellar chemistry. As with models today, the methods used lacked reliability, but the speculation was impressive! Mark Twain might well have said of this infant subject "One gets such wholesale returns of conjecture out of such a trifling investment of fact". The detection of unidentified lines around the period that Swings and Rosenfeld were writing provoked much interest, but even the most optimistic speculator could hardly have imagined developments which would occur during the next 50 years. By 1987 about 70 varieties of molecule had been identified in the interstellar and circumstellar regions, They range in complexity from simple diatomics such as H2 and CO to such species as ethanol C2HeDH, acetone (CHs)2CO, and the largest interstellar molecule detected so far, cyano-penta­ acetylene HC11N, The study of these molecules in astronomy has developed enormously, especially over the last 20 years, and is now codified in the new subject of astrochemistry, That such a variety of chemical species should exist in tenuous regions of the Galaxy is fascinating.