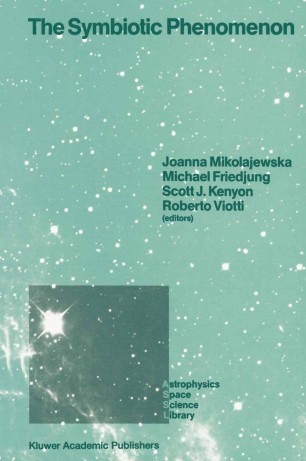 Proceedings of the 103rd Colloquium of the International Astronomical Union, Held in Torun, Poland, August 18–20, 1987

Symbiotic stars were identified spectroscopically as M giants with a very strong He II 4686 emission line. After five decades of study by many astronomers, the first internatioinal meetings devoted to symbiotics were held at the University of Colorado (Boulder) and at the Haute Provence Observatory during the Summer of 1981. These conferences emphasized exciting new results obtained by modern satellite (EINSTEIN, IUE) and ground-based observatories. Although the vast majority of the participants were already fairly sure that symbiotics are almost certainly interacting binary systems, and not extremely peculiar single stars, it was not clear exactly which types of physical processes were needed to be invoked to explain their observed behaviour. Many were even worried that it might not be possible to clearly define a class of "symbiotic stars" , and thus establish a unique model applicable to any system. Since the publication of the Haute-Provence proceedings, our understanding of the physical processes occuring in symbiotic stars (and in related objects such as cataclysmic variables and compact planetary nebulae) has greatly improved. We now speak confidently of a "symbiotic phenomenon" , in which an evolved red giant and a hot companion object (usually thought to be an accreting main sequence star or a luminous white dwarf star) happily coexist.