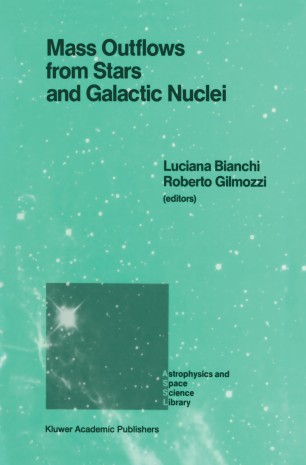 Proceedings of the Second Torino Workshop, Held in Torino, Italy, May 4–8, 1987

The objective of this workshop was to put together observational and theoretical works on outflows from different kinds of astrophysical objects, occurring on different scales and at various evolutionary phases, and to discuss the impact of observations from future space missions. For the stars, we thought to follow throughout the evolution the relevance (rates and dynamical rrodes) of the mass loss phenomenon, e. g. to explain how and when massive stars loose most of their ini tial mass to end up with typical WD masses. The observations of the solar wind were included for being a unique case where the origin and propagation of the outflow can be resolved. We thought that the comparison with similar phenomena occurring in galactic outflows would be fruitful, as demonstrated by recent works on galactic winds and jets. The interest of having this workshop in Torino came because there are groups in this area, at the Astronomical Observatory and at the Institute of Physics of the University, involved in the theoretical and observational studies of outflows from astrophysical objects. The members of the Scientific Organizing Conmi ttee were: V. Castellani, C. Cesarski, P. Conti, A. Ferrari, A. Gabriel, M. Grewing, Y. Kondo, H. Lamers, V. Manno, M. Rees and R. Schilizzi. The Local Organizing Conmi ttee was: L. Bianchi, G. Massone and E. Antonucci. During the workshop the following topics were treated: the solar wind, the mass loss from cool stars and from hot stars (m. s.