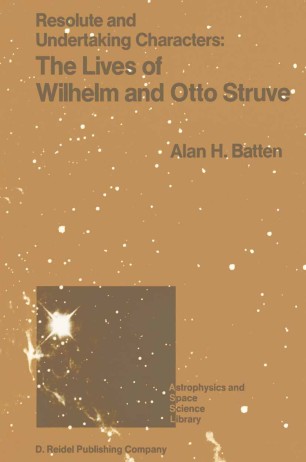 Resolute and Undertaking Characters: The Lives of Wilhelm and Otto Struve

My interest in the history of the Struve family is long-standing but lay dormant until 1972, when I found myself organizing a symposium of the International Astronomical Union in memory of the second Otto Struve. To satisfy my own curiosity, I investigated the precise relationships of the famous astronomers in the family and published an account of them, based mainly on secondary sources. The exercise made me a ware that there was no biography in English of the first and probably still the greatest astronomer in the clan -­ Friedrich Georg Wilhelm Struve. Wilhelm's son, the first Otto, wrote an account (in German) of his father's life, intended primarily for family and close friends and --though printed-- not generally available. Through the kindness of a family member I have a copy from which I have been able to work. The Soviet historian of science, Z. K. Sokolovskaya, wrote a biography in Russian, in 1964, to mark the centenary of Wilhelm's death. This had a limited edition, and my efforts to obtain a copy failed. Neither work has, in its entirety, been translated into English, although Michael Meo of Oakland, California, and Kevin Krisciunas of Hilo, Hawaii, have kindly made available to me their unpublished translations of some sections of the latter. In the of a complete copy, however, when I decided to attempt an English­ absence language biography, I thought it best to do so independently of Sokolovskaya's.