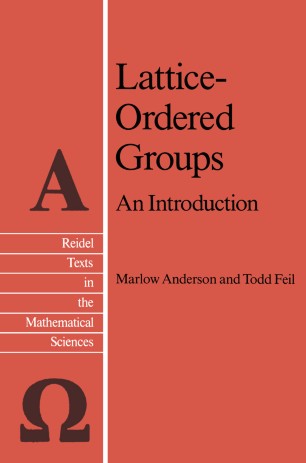 Part of the Reidel Texts in the Mathematical Sciences book series (RTMS, volume 4)

The study of groups equipped with a compatible lattice order ("lattice-ordered groups" or "I!-groups") has arisen in a number of different contexts. Examples of this include the study of ideals and divisibility, dating back to the work of Dedekind and continued by Krull; the pioneering work of Hahn on totally ordered abelian groups; and the work of Kantorovich and other analysts on partially ordered function spaces. After the Second World War, the theory of lattice-ordered groups became a subject of study in its own right, following the publication of fundamental papers by Birkhoff, Nakano and Lorenzen. The theory blossomed under the leadership of Paul Conrad, whose important papers in the 1960s provided the tools for describing the structure for many classes of I!-groups in terms of their convex I!-subgroups. A particularly significant success of this approach was the generalization of Hahn's embedding theorem to the case of abelian lattice-ordered groups, work done with his students John Harvey and Charles Holland. The results of this period are summarized in Conrad's "blue notes" [C].