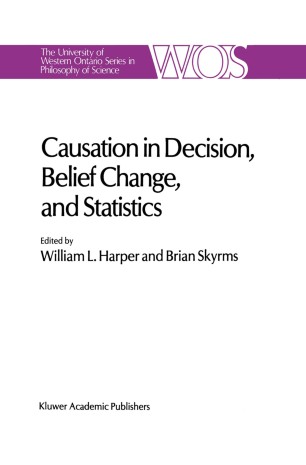 Proceedings of the Irvine Conference on Probability and Causation

Part of the The University of Western Ontario Series in Philosophy of Science book series (WONS, volume 42)

The papers collected here are, with three exceptions, those presented at a conference on probability and causation held at the University of California at Irvine on July 15-19, 1985. The exceptions are that David Freedman and Abner Shimony were not able to contribute the papers that they presented to this volume, and that Clark Glymour who was not able to attend the conference did contribute a paper. We would like to thank the National Science Foundation and the School of Humanities of the University of California at Irvine for generous support. WILLIAM HARPER University of Western Ontario BRIAN SKYRMS University of California at Irvine Vll INTRODUCTION PART I: DECISIONS AND GAMES Causal notions have recently corne to figure prominently in discussions about rational decision making. Indeed, a relatively influential new approach to theorizing about rational choice has come to be called "causal decision theory". 1 Decision problems such as Newcombe's Problem and some versions of the Prisoner's Dilemma where an act counts as evidence for a desired state even though the agent knows his choice of that act cannot causally influence whether or not the state obtains have motivated causal decision theorists.