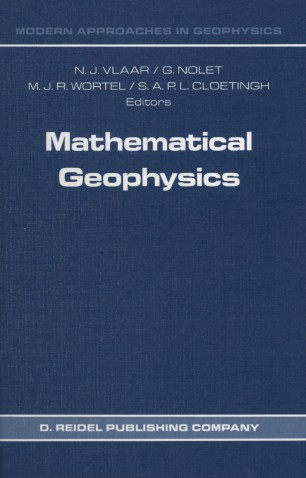 A Survey of Recent Developments in Seismology and Geodynamics

The contributions to this book follow a topical trend. In several geophysical fields evidence is accumulating concerning the deviation of the earth's structure from radial symmetry. Seismology provides the most adequate resolution for revealing the earth's lateral inhomogeneity on a global to local scale. Lateral structure in the density distribution is also manifest in the earth's gravity field and in the geoid. Asphericity in physical parameters, generally supposed only to vary with the vertical coordinate, has a profound influence on geodynamics. The effects of these deviations from spherical symmetry concern in particular convection theory, post-glacial rebound and the dynamics of the lithosphere and upper mantle in general. At the 16th International Conference on Mathematical Geophysics which was held in Oosterbeek, the Netherlands, in 1986, the need was felt to present the state of the art. Several prospective authors were found interested to contribute to the present book. This Oosterbeek conference was one in a long series of topical conferences starting with the Upper Mantle Project Symposia on Geophysical Theory and Computers in the 1960s, and thence their successors, the conferences on Mathematical Geophysics, until the present.