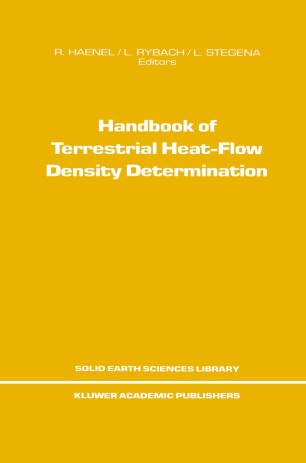 with Guidelines and Recommendations of the International Heat-Flow Commission

There comes a time in the affairs of every organization when we have to sit down and take stock of where we are and where we want to go. When the International Heat Flow Committee (as it was first called), IHFC, was formed in 1963 at the San Francisco International Union of Geodesy and Geophysics with Francis Birch as its first Chairman, the principal purpose was to stimulate work in the basic aspects of geothermics, particularly the measurement of terrestrial heat-flow density (HFD) in what were then the 'geothermally underdeveloped' areas of the world. In this, the IHFC was remarkably successful. By the beginning of the second decade of our existence, interest in the economic aspects of geothermics was increasing at a rapid pace and the IHFC served as a conduit for all aspects of geothermics and, moreover, became the group responsi­ ble for collecting data on all types of HFD measurements. In all the tasks that are undertaken, the IHFC relies on the enthusiasm of its members and colleagues who devote much of their time to the important but unglamorous and personally unrewarding tasks that were asked of them, and we arc fortunate that our parent institutions are usually quite tolerant of the time spent by their employees on IHFC work.