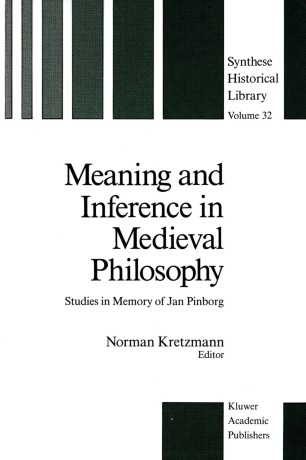 Meaning and Inference in Medieval Philosophy

Studies in Memory of Jan Pinborg

The studies that make up this book were written and brought together to honor the memory of Jan Pinborg. His unexpected death in 1982 at the age of forty-five shocked and saddened students of medieval philosophy everywhere and left them with a keen sense of disappoint­ ment. In his fifteen-year career Jan Pinborg had done so much for our field with his more than ninety books, editions, articles, and reviews and had done it all so well that we recognized him as a leader and counted on many more years of his scholarship, his help, and his friendship. To be missed so sorely by his international colleagues in an academic field is a mark of Jan's achievement, but only of one aspect of it, for historians of philosophy are not the only scholars who have reacted in this way to Jan's death. In his decade and a half of intense productivity he also acquired the same sort of special status among historians of linguistics, whose volume of essays in his memory is being G. L. Bursill-Hall almost simultane­ published under the editorship of ously with this one. Sten Ebbesen, Jan's student, colleague, and successor as Director of the Institute of Medieval Greek and Latin Philology at the University of Copenhagen, has earned the gratitude of all of us by memorializing Jan 1 in various biographical sketches, one of which is accompanied by a 2 complete bibliography of his publications.