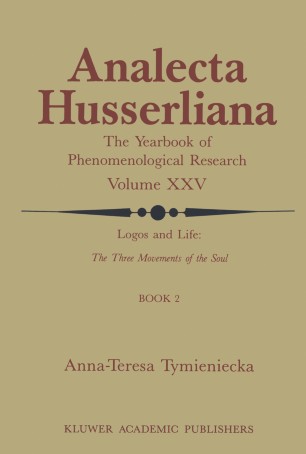 Logos and Life: The Three Movements of the Soul

PART I THE CRITIQUE OF REASON CONTINUED: FROM LOGOS TO ANTI-LOGOS 1. THE NEW CRITIQUE OF REASON A new critique of reason is the crucial task imposed on the philosophy of our times as we emerge more and more from so-called "modernism" into a historical phase which will have to take its own paths and find its own determination. It may be considered that the main developmental line of modern times in its philosophy as well as in its culture at large was traced by the Cartesian cogito. The unfolding of Occidental philos­ ophy has culminated in reason or intellect's being awarded the central place. This is its specific trait. We can see a direct line of progression from the cogito to Kant's Critique. It is no wonder that this work is the landmark of modern philosophy. Kant's Critique was concerned with the foundation of the sciences. Edmund-Husserllaunched a second major, renewed, critique of reason, one which addresses not only the critical situation of the sciences but extends the critique even to the situation of Occidental culture as its malaise is diagnosed by this great thinker. Edmund Husserl voiced, in fact, the conviction that Occidental humanity has reached in our age the peak of its unfolding. His identify­ ing this peak with the formulation of phenomenological philosophy strikes at the point in which the significant and novel developments of Occidental culture and philosophy (phenomenology, that is) coincide.