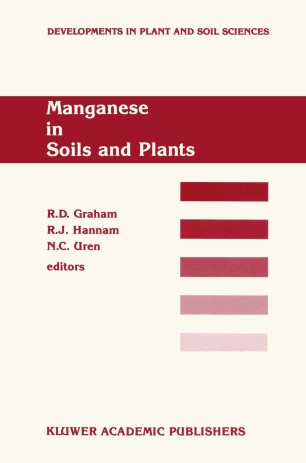 Manganese in Soils and Plants

Proceedings of the International Symposium on ‘Manganese in Soils and Plants’ held at the Waite Agricultural Research Institute, The University of Adelaide, Glen Osmond, South Australia, August 22–26, 1988 as an Australian Bicentennial Event

Part of the Developments in Plant and Soil Sciences book series (DPSS, volume 33)

Sixty years ago at the Waite Agricultural Research Institute, G. Samuel, a plant pathologist, and C. S. Piper, a chemist, published their conclusion that the cause of roadside take-all, a disease of oats, was manganese deficiency. This report, together with the concurrent and independent studies of W. M. Carne in Western Australia were the first records of manganese deficiency in Australia and came only six years after McHargue's paper which is generally accepted as the final proof of the essentiality of this element. There must have been a few doubts for some people at the time, however, as the CAB publication, 'The Minor Elements of the Soil' (1940) expressed the view that further evidence to this effect was provided by Samuel and Piper. Their historic contributions are recognised by the International Symposium on Manganese in Soils and Plants as it meets on the site of their early labours to celebrate the 60th anniversary. This year Australians also acknowledge 200 years of European settlement in this country and so the Symposium is both a Bicentennial and a diamond jubilee event which recognises the impact of trace elements on agricultural development in Australia. In a broader sense, a symposium such as this celebrates, as it reviews, the efforts of all who over the ages have contributed to our knowledge of manganese in soils and plants.