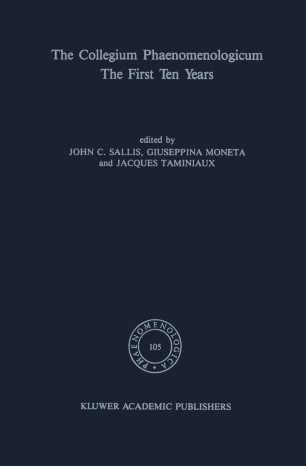 It is our hope that this volume will serve to document both the history of the Collegium Phaenomenologicum during its first ten years as well as some of the philosophical work that has grown out of the annual gatherings in Perugia. The Introduction narrates the history and is supplemented by the Appendices, in which the programs and the participants for each of the ten years are listed. The essays, on the other hand, present in more finished form work that was developed in connection with courses, lectures, or seminars conducted during the first ten years of the Collegium. Giuseppina Moneta John Sallis Jacques Taminiaux Introduction The Collegium Phaenomenologicum in Its First Ten Years GIUSEPPINA C. MONETA The idea of the Collegium Phaenomenologicum first took shape in a conversa­ tion that I had with Werner Marx at his home in Bollschweil in the Spring of 1975. Previously I had thought of the possibility of a gathering of phenom­ enologists somewhere in Italy during the summer months. And when I ex­ plained to Werner Marx that it would not be difficult to find accommodation for such a gathering in a Franciscan monastery in Umbria, he responded enthusiastically and assured me that such a project would have the support of the Husserl Archives in Leuven and in Freiburg.