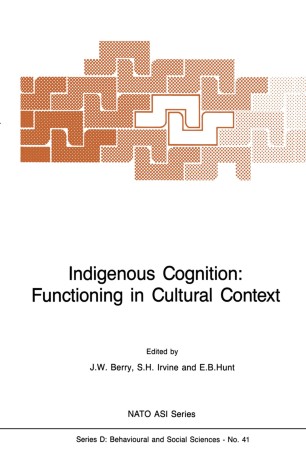 Cognitive psychology has established itself as one of the major branches of the discipline. with much to its credit in such areas as decision making. information processing. memory and learning. Similarly. the assessment of cognitive abilities has become one of the hallmarks of the practice of psychology in the school. in the factory and in the clinic. In recent years. these two branches have begun to interact. and the two approaches have begun mutually to engage each other. A third trend, that of cross-cultural cognitive psychology, has been informed both by experimental cognitive sciences and by the practice of ability assessment (see. for example. Berry and Dasen, 1974; Cole and Scribner, 1974). However. the reverse has not been true: the cognitive processes and abilities of much of the world's peoples studied by cross-cultural psychologists have not been introduced to psychologists working in these two Western traditions (see Irvine and Berry, 1987). This volume attempts to begin this introduction by asking the question: "What is known about the cognitive functions of other peoples that could enable extant psychology to become more comprehensive, to attain a 'universal' cognitive psychology?" Who are these "other peoples". and by extension, what then is "indigenous cognition"? The first question is rather easy to answer. but the second is more difficult.