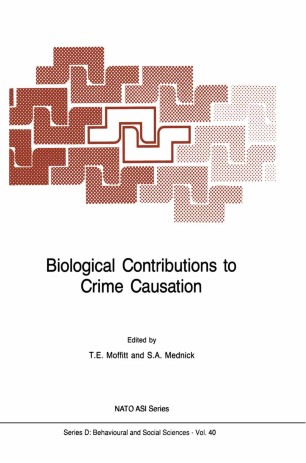 This book presents reviews of the literature and reports of new findings from research into biological correlates of criminal behavior. The chapters are revised versions of talks given by participants in an Advanced Study Institute sponsored by the North Atlantic Treaty Organization and held inCastelvecchio Pascoli in September, 1986. It is our second edited volume on biology and crime. The first book, The Causes of Cdme; New Biological Apwoaches, was published in 1987. In the preface to that book we described the regrettable hi. tory of the paeudobiological research into social problem. conducted by the Social Darwinists at the turn of the century. We requested that that unfortunate legacy not inhibit responsible and scientifically sound investigations of biological and psychological variables in criminology today. Evidence is mounting that showl that research limited to social and environmental vadables cannot explain the behavior of the minority of criminal offenders whose criminal careen begin in adolescence and develop into recidivistic and violent . . saults on society. Certainly these offenders are few, but epidemiological studies have found them to be responsible for an amount of crimes disproportionate to their small numbers. As few . . 5 % of males commit over 50% of criminal offenses. Intervention directed at these relatively few individuals could, if succes. ful, dramatically reduce our growing violent crime rate. The chapters in our earlier book showed that some biological variables do relate to this type of chronic offending.