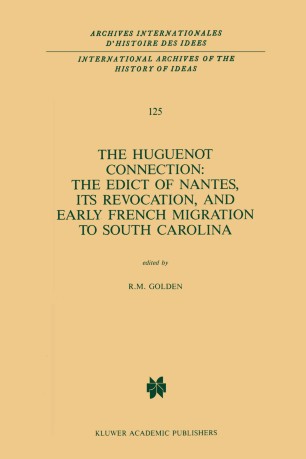 The Huguenot Connection: The Edict of Nantes, Its Revocation, and Early French Migration to South Carolina

Richard M. Golden Possibly the most famous event in Louis XIV's long reign (1643-1715) was the Revocation of the Edict of Nantes, issued by the French king on 17 October 1685 and registered five days later by the parlement of _Paris, a sovereign judicial institution having jurisdiction over approximately one-half of the kingdom. The Edict of Fontainebleau (the Revocation's technical name, derived from the palace southeast of Paris where Louis had signed the act) declared illegal the public profession of Calvinist Protestantism and led perhaps as many as 200,000 Huguenots/ as French Protestants were known, to flee their homeland. They did so despite royal decrees against emigration and the harsh punishment (prison for women, the galleys for men) awaiting those caught escaping. The Revocation is a landmark in the checkered history of religious toleration (or intolerance); Huguenots, many Roman Catholics, and historians of all persuasions have heaped scorn on Louis XIV for withdrawing the Edict of Nantes, issued by his grandfather, Henry IV (1589-1610). King Henry had proclaimed the 1598 Edict to be both "perpetual" and "irrevocable. " Although one absolutist king could not bind his successors and although "irrevocable" in the context of French law simply meant irrevocable until superseded by another edict, historians have accused Louis XIV of 2 breaking faith with Henry IV and the Huguenots. Louis did only what Henry prob­ ably would have done had he possessed the requisite power.