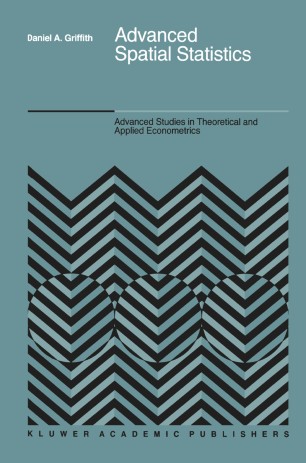 Special Topics in the Exploration of Quantitative Spatial Data Series

In recent years there has been a growing interest in and concern for the development of a sound spatial statistical body of theory. This work has been undertaken by geographers, statisticians, regional scientists, econometricians, and others (e. g. , sociologists). It has led to the publication of a number of books, including Cliff and Ord's Spatial Processes (1981), Bartlett's The Statistical Analysis of Spatial Pattern (1975), Ripley's Spatial Statistics (1981), Paelinck and Klaassen's Spatial Economet~ics (1979), Ahuja and Schachter's Pattern Models (1983), and Upton and Fingleton's Spatial Data Analysis by Example (1985). The first of these books presents a useful introduction to the topic of spatial autocorrelation, focusing on autocorrelation indices and their sampling distributions. The second of these books is quite brief, but nevertheless furnishes an eloquent introduction to the rela­ tionship between spatial autoregressive and two-dimensional spectral models. Ripley's book virtually ignores autoregressive and trend surface modelling, and focuses almost solely on point pattern analysis. Paelinck and Klaassen's book closely follows an econometric textbook format, and as a result overlooks much of the important material necessary for successful spatial data analy­ sis. It almost exclusively addresses distance and gravity models, with some treatment of autoregressive modelling. Pattern Models supplements Cliff and Ord's book, which in combination provide a good introduction to spatial data analysis. Its basic limitation is a preoccupation with the geometry of planar patterns, and hence is very narrow in scope.