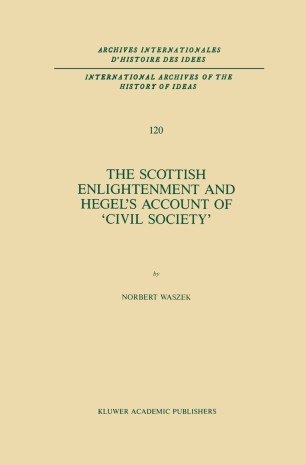 The present study, which investigates the influence of the Scottish Enlightenment on Hegel's account of 'civil society' or "biirgerliche Gesellschaft", is based on my PhD thesis, submitted to the University of Cambridge in September 1983. Its publication provides me with a welcome opportunity to acknowledge the help and encouragement I have received over the years from scholars, friends, and relations. At the Ruhr University of Bochum where I began my studies, I am indebted to Professor Otto Poggeler (Director of the Hegel Archives), to the other, past and present members of staff at the Hegel Archives, and to Professors Jiirgen Gebhardt, Jiirgen von Kempski, Heinz Kim­ merle; and Leo Kofler. It was my time at Bochum under the guidance of these scholars that kindled my love for the study of Hegel, which proved to be a lasting romance. In Scotland, where I continued my studies and spent two fruitful and happy years, I am indebted to George Elder Davie and Richard Gunn, who first introduced me to the Scottish Enlightenment, and to Professors R. H. Campbell and T. D. Campbell, who supervised my research in that field. At Cambridge, where most of this study was prepared, my greatest debt is to Duncan Forbes. I am grateful for his supervision of my research, but also, beyond the scope of my research, for what I have learned, genuinely learned, from the man.