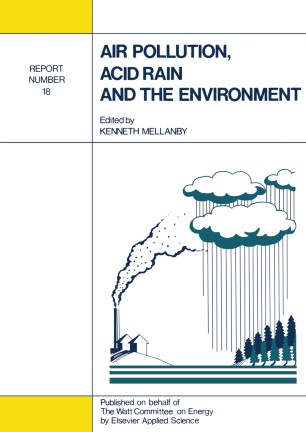 The Watt Committee on Energy became active in of the effects on buildings, for instance. Proposals the study of Acid Rain during 1982. Perhaps the for action should therefore concentrate on measures only aspect of the subject that has become more that promise a real improvement as a result of certain during the subsequent five years is that the expenditure. expression 'Acid Rain' is used loosely in public The Watt Committee's study of this subject has been in two phases. The first dealt with the nature debate for a complex of industrial and environ­ mental phenomena. Among these, Acid Rain in the of the problem, and culminated in the publication straightforward meaning of the words-rain and of Watt Committee Report No. 14 in 1984. That perhaps snow having a significantly high level of Report was divided into four sections, each of acidity-is of only limited importance. To represent which was prepared by a sub-group of the working this perspective, therefore, the Watt Committee Ex­ group: they dealt respectively with the fate of air­ borne pollution, vegetation and soils, fresh water ecutive decided that the study leading to the present Report should be entitled 'Air Pollution, Acid Rain and remedial strategy. In the second phase, these and the Environment'. sub-groups have brought their sections up-to-date The Watt Committee's interest in Acid Rain and a fifth sub-group was appointed to study arises from the fact that, among its causes, the buildings and non-living materials.