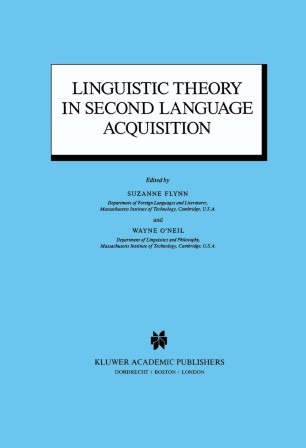 Suzanne Flynn and Wayne O'Neil Massachusetts Institute of Technology I. INTRODUCTION The theory of Universal Grammar (UG) as explicated e. g. in Chomsky, 1986, has led to explosive developments in the study of natural language as well as to significant advances in the study of first language (L I) acquisition. Most recently. the theory of UG has led to important theore­ tical and empirical advances in the field of adult second language (L2) acquisition as well. The principle impetus for this development can be traced to the work in linguistics which shifted the study "from behavior or the products of behavior to states of the mind/brain that enter into behavior" (Chomksy. 1986:3). Grammars within this framework are conceived of as theoretical accounts of "the state of the mind/brain of the person who knows a particular language" (Chomsky. 1986:3). Research within fields of language acquisition seeks to isolate and specify the properties of the underlying competence necessary for language learning. Full development of a theory of UG demands study and understanding of the nature of both the formal properties of language and of the language acquisition process itself. However. while there is a tradition of debate and dialogue established between theoretical linguistics and Ll acquisition research. relatively few connections have been made between linguistic theory and L2 acquisition research.