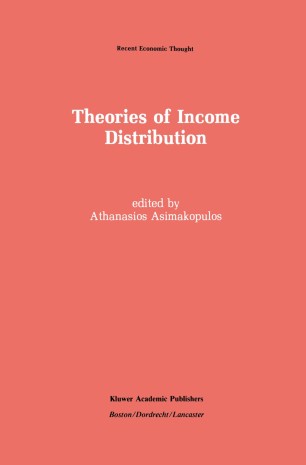 This book brings together the work of scholars who have written for it independent essays in their areas of particular expertise in the general field of income distribution. The first eight chapters provide a review of the major theories of income distribution, while the final two are con­ cerned with problems of empirical estimates and inferences. One of these chapters presents estimates of factor shares in national income in the United States, the United Kingdom and Canada, while the other ex­ amines how relationships between the size distribution of income and economic development are being investigated. A convenient way of conveying an understanding of how economic theorists have dealt with the distribution of income is to examine separ­ ately each major approach to this subject. Each contributor was thus assigned a particular approach, or a major theorist. No attempt was made to avoid the apparent duplication that occurs when the same references are examined by different contributors. The reader gains by seeing how the same material can be treated by those looking at it from different perspectives. A chapter each has been devoted to Marx and Marshall.