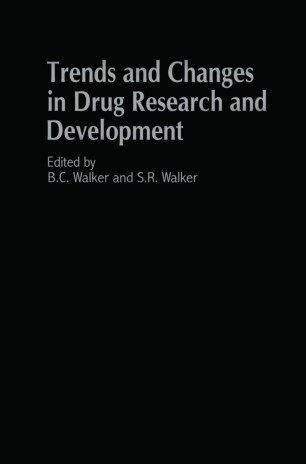 Trends and Changes in Drug Research and Development

Proceedings of the Society for Drug Research 20th Anniversary Meeting held at the Pharmaceutical Society of Great Britain, London 26 September 1986

The 20th Anniversary of a Learned Society is a momentous event in its af­ fairs, and it is fitting that, in the Appendix to the Proceedings of the 20th An­ niversary Meeting, the history of the Society for Drug Research is outlined. The aim of the Society, to encourage an interdisciplinary approach and to act as an organisation freed from any specific scientific branch of knowledge, was achieved and is exemplified by the publication of these proceedings of the Anniversary Meeting held at the Pharmaceutical Society of Great Britain. In only two other cases have the Society's proceedings been published, main­ taining the original decision and policy to allow membership to enjoy com­ munications from those who may not have agreed to speak had publication been mandatory. The papers presented at the Anniversary Meeting covered a wide range of scientific disciplines, and it is fitting that work of such calibre should have been published under the able editorship of Stuart and Bryan Walker. They should prove invaluable to those who are interested in Drug Research.