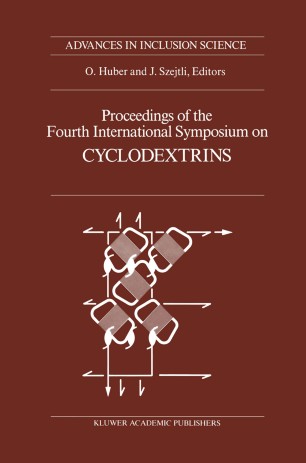 Proceedings of the Fourth International Symposium on Cyclodextrins

The rapidly growing number of papers and patents on Cyclodextrins and their potential or actual industrial uses raised the idea to organize a Symposium on Cyclodextrins. This Symposium - held in September 1981 in Budapest, with more than 200 participants from 17 countries - proved to be very succesfull in every respect, therefore it has been accepted unanimously to organize the lInd CD-Symposium in 1984, in Tokyo. (The Budapest-Symposium got posteriorly the "First" adjective). The IInd Symposium was held together with the III. Int. Symposium on Chlatrate Compounds and Molecular Inclusion Phenomena. The IIIrd CD-Symposium also was held as a Joint Symposium, with the IVth. Chlatrate Symposium in Lancaster, U. K. ,1986. The limited time however showed, that such a broad field - from calixarenes to zeolites - can not be managed efficiently. Therefore the International Organizing Committee voted for separation of two Symposia in the future. The IVth Int. CD-Symposium was held in the Munich, in April 1988, and the Vth Chlatrate Symposium (called already Vth Int. Symposium on Inclusion Phenomena and Molecular Recognition) was held in Alabama, Sept. 1988. In Munich 220 participants from 21 countries attended 32 verbal lectures and 54 posters. This volume contains the submitted 71 manuscripts of the IVth Cyclodextrin Symposium.