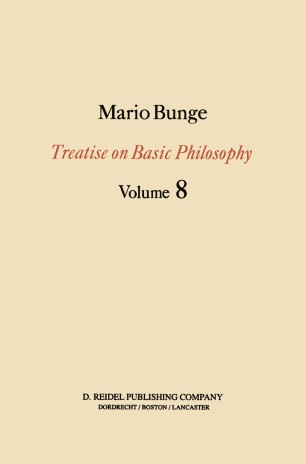 Ethics: The Good and The Right

The purpose of this Introduction is to sketch our approach to the study of value, morality and action, and to show the place we assign it in the system of human knowledge. 1. VALUE, MORALITY AND ACTION: FACT, THEORY, AND METATHEORY We take it that all animals evaluate some things and some processes, and that some of them learn the social behavior patterns we call 'moral principles', and even act according to them at least some of the time. An animal incapable of evaluating anything would be very short-lived; and a social animal that did not observe the accepted social behavior patterns would be punished. These are facts about values, morals and behavior patterns: they are incorporated into the bodies of animals or the structure of social groups. We distinguish then the facts of valuation, morality and action from the study of such facts. This study can be scientific, philosophic or both. wayan animal evaluates environmental A zoologist may investigate the or internal stimuli; a social psychologist may examine the way children learn, or fail to learn, certain values and norms when placed in certain environments. And a philosopher may study such descriptive or explan­ atory studies, with a view to evaluating valuations, moral norms, or behavior patterns; he may analyze the very concepts of value, morals and action, as well as their cognates; or he may criticize or reconstruct value beliefs, moral norms and action plans.