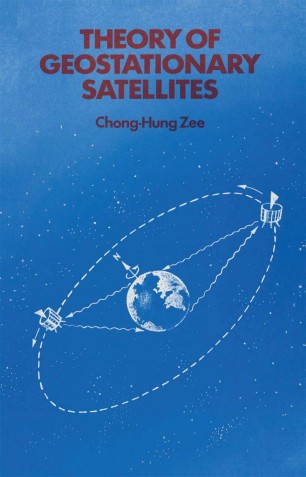 Geostationary or equatorial synchronous satellites are a daily reminder of our space efforts during the past two decades. The nightly television satellite weather picture, the intercontinental telecommunications of television transmissions and telephone conversations, and the establishrnent of educational programs in remote regions on Earth are constant reminders of the presence of these satellites. As used here, the term 'geo­ stationary' must be taken loosely because, in the long run, the satellites will not remain 'stationary' with respect to an Earth-fixed reference frame. This results from the fact that these satellites, as is true for all satellites, are incessantly subject to perturbations other than the central-body attraction of the Earth. Among the more predominant pertur­ bations are: the ellipticity of the Earth's equator, the Sun and Moon, and solar radiation pressure. Higher harmonics of the Earth's potential and tidal effects also influence satellite motion, but they are of second­ order when compared to the predominant perturbations. This volume deals with the theory of geostationary satellites. It consists of seven chapters. Chapter 1 provides a general discussion including a brief history of geostationary satellites and their practical applications. Chapter 2 describes the Earth's gravitational potential field and the methodology of solving the geostationary satellite problem. Chapter 3 treats the effect of Earth's equatorial ellipticity (triaxiality) on a geostationary satellite. Chapter 4 deals with the effects of the Sun and Moo~ on the satellite's motion while Chapter 5 presents the combined influences of the Sun, Moon and solar radiation pressure.