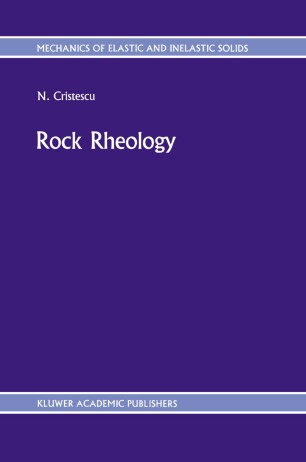 Part of the Mechanics of Elastic and Inelastic Solids book series (MEIS, volume 7)

The present book is the result of work carried out over a period of about ten years by the author and his co-workers in order to describe more accurately the slow irreversible deformation in time of the rocks surrounding underground openings. To begin with, our efforts were directed toward a better under­ standing of the mechanical behaviour of rocks and to the formulation of more precise mathematical models for their dominant mechanical properties, mainly irreversible dilatancy and/or compressibility during creep. Subsequent efforts were focused on finding improved solutions to important mining and oil engineering problems, such as, for instance, the creep of rocks around wells and tunnels, short-term failure which may occur around an underground opening, damage and failure which take place after long-time intervals, the tunnel support analysis incorporating rock creep, etc. The book is the result of a great number of questions posed either by mining engineers or by the author himself, and of the corresponding answers (unfor­ tunately often only partial answers). This dialogue must certainly be continued in order to improve the models and to formulate models for other kinds of rocks, or, ultimately to obtain solutions for other important engineering problems. It is hoped that the book will also contribute to a better description, by means of mathematical models, of the mechanical behaviour of rocks.

`This book is of interest to rock mechanics researchers especially those in the geotechnical field.'
Pageoph
Buy options