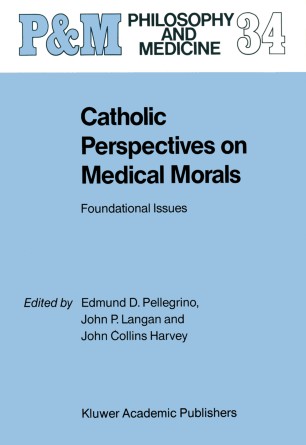 Part of the Philosophy and Medicine book series (PHME, volume 34)

CATHOLIC PERSPECTIVES AND CONTEMPORARY MEDICAL MORALS A Catholic perspective on medical morals antedates the current world­ wide interest in medical and biomedical ethics by many centuries[5]. Discussions about the moral status of the fetus, abortion, contraception, and sterilization can be found in the writings of the Fathers and Doctors of the Church. Teachings on various aspects of medical morals were scattered throughout the penitential books of the early medieval church and later in more formal treatises when moral theology became recog­ nized as a distinct discipline. Still later, medical morality was incorpor­ ated into the many pastoral works on medicine. Finally, in the contemporary period, works that strictly focus on medical ethics are produced by Catholic moral theologians who have special interests in matters medical. Moreover, this long tradition of teaching has been put into practice in the medical moral directives governing the operation of hospitals under Catholic sponsorship. Catholic hospitals were monitored by Ethics Committees long before such committees were recommended by the New Jersey Court in the Karen Ann Quinlan case or by the President's Commission in 1983 ([8, 9]). Underlying the Catholic moral tradition was the use of the casuistic method, which since the 17th and 18th centuries was employed by Catholic moralists to study and resolve concrete clinical ethical dilem­ mas. The history of casuistry is of renewed interest today when the case method has become so widely used in the current revival of interest in medical ethics[ll].