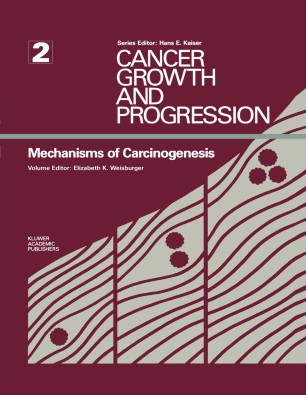 but also the possibility of intervention in specific stages. In Human behavior, including stress and other factors, plays an important role in neoplasia, although too little is known addition, variables which affect cancer development as well on the reasons for such development. Carcinogens, which as some endogenous factors can be better delineated help initiate the neoplastic process, may be either synthetic through such investigations. The topics of this volume encompass premalignant non­ or naturally-occurring. Cancer causation may be ascribed to invasive lesions, species-specific aspects of carcinogenicity, certain chemicals, physical agents, radioactive materials, viruses, parasites, the genetic make-up of the organism, and radiation, viruses, a quantum theory of carinogenesis, onco­ bacteria. Humans, eumetazoan animals and vascular plants genes, and selected environmental carcinogens. are susceptible to the first six groups of cancer causes, whe­ reas the last group, bacteria, seems to affect only vascular plants. Neoplastic development may begin with impairment ofJmdy defenses by a toxic material (carcinogen) which acts as an initiator, followed by promotion and progression to an overt neoplastic state. Investigation of these processes Series Editor Volume Editor allows not only a better insight into the mechanism of action Hans E. Kaiser Elizabeth K. Weisburger vii ACKNOWLEDGEMENT Inspiration and encouragement for this wide ranging project on cancer distribution and dissemination from a comparative biological and clinical point of view, was given by my late friend E. H. Krokowski.