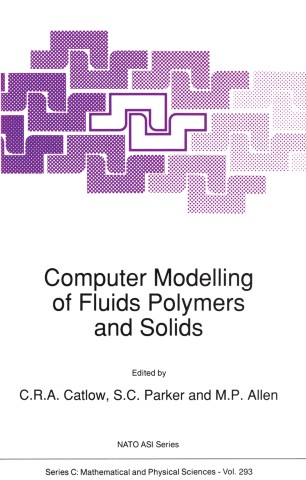 Computer Modelling techniques have developed very rapidly during the last decade, and interact with many contemporary scientific disciplines. One of the areas of greatest activity has concerned the modelling of condensed phases, including liquids solids and amorphous systems, where simulations have been used to provide insight into basic physical processes and in more recent years to make reliable predictions of the properties of the systems simulated. Indeed the predictive role of simulations is increasingly recognised both in academic and industrial contexts. Current active areas of application include topics as diverse as the viscosity of liquids, the conformation of proteins, the behaviour of hydrogen in metals, the diffusion of molecules in porous catalysts and the properties of micelles. This book, which is based on a NATO ASI held at the University of Bath, UK, from September 5th-17th, 1988, aims to give a general survey of this field, with detailed discussions both of methodologies and of applications. The earlier chapters of the book are devoted mainly to techniques and the later ones to recent simulation studies of fluids, polymers (including biological molecules) and solids. Special attention is paid to the role of interatomic potentials which are the fundamental physical input to simulations. In addition, developments in computer hardware are considered in depth, owing to the crucial role which such developments are playing in the expansion of the horizons of computer modelling studies.