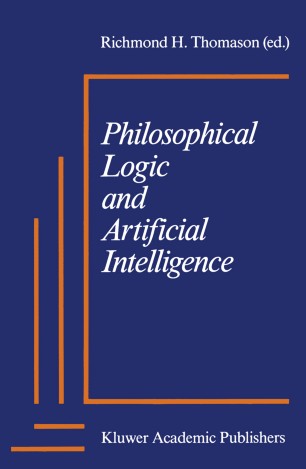 cians concerned with using logical tools in philosophy have been keenly aware of the limitations that arise from the original con­ centration of symbolic logic on the idiom of mathematics, and many of them have worked to create extensions of the received logical theories that would make them more generally applicable in philosophy. Carnap's Testability and Meaning, published in 1936 and 1937, was a good early example of this sort of research, motivated by the inadequacy of first-order formalizations of dis­ 'This sugar cube is soluble in water'. positional sentences like And in fact there is a continuous history of work on this topic, extending from Carnap's paper to Shoham's contribution to the present volume . . Much of the work in philosophical logic, and much of what has appeared in The Journal of Philosophical Logic, was mo­ tivated by similar considerations: work in modal logic (includ­ ing tense, deontic, and epistemic logic), intensional logics, non­ declaratives, presuppositions, and many other topics. In this sort of research, sin.ce the main point is to devise new formalisms, the technical development tends to be rather shallow in comparison with mathematical logic, though it is sel­ dom absent: theorems need to be proved in order to justify the formalisms, and sometimes these are nontrivial. On the other hand, much effort has to go into motivating a logical innovation.