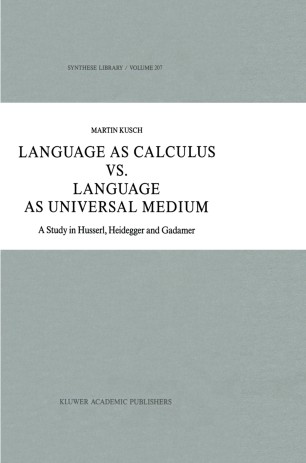 A Study in Husserl, Heidegger and Gadamer

I first became interested in Husserl and Heidegger as long ago as 1980, when as an undergraduate at the Freie Universitat Berlin I studied the books by Professor Ernst Tugendhat. Tugendhat's at­ tempt to bring together analytical and continental philosophy has never ceased to fascinate me, and even though in more recent years other influences have perhaps been stronger, I should like to look upon the present study as still being indebted to Tugendhat's initial incentive. It was my good fortune that for personal reasons I had to con­ tinue my academic training from 1981 onwards in Finland. Even though Finland is a stronghold of analytical philosophy, it also has a tradition of combining continental and Anglosaxon philosophical thought. Since I had already admired this line of work in Tugendhat, it is hardly surprising that once in Finland I soon became impressed by Professor Jaakko Hintikka's studies on Husserl and intentionality, and by Professor Georg Henrik von Wright's analytical hermeneu­ tics. While the latter influence has-at least in part-led to a book on the history of hermeneutics, the former influence has led to the present work. My indebtedness to Professor Hintikka is enormous. Not only is the research reported here based on his suggestions, but Hintikka has also commented extensively on different versions of the manuscript, helped me to make important contacts, found a publisher for me, and-last but not least-was a never failing source of encouragement.