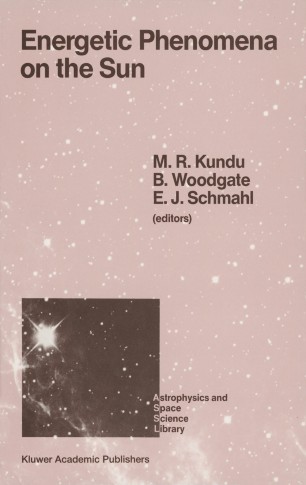 Energetic Phenomena on the Sun

This publication is a result of three meetings, each 5 days long, held at the Goddard Space Flight Center on January 24-28, 1983, June 8-14, 1983, and February 13-17, 1984. The meetings were held in the interim between the full operations of the Solar Maximum Mission (SMM) in 1980, and the renewed operations after its repair in orbit in April 1984. Their general objectives were as follows: o Synthesize flare studies after three years of SMM data analysis. Many analyses of individual flares and individual phenomena, often jointly across many data sources had been published, but a need existed for a broader synthesis and updating of our understanding of solar flares since the Skylab Flare Workshops held several years earlier. o Encourage a broader participation in the SMM data anlysis and combine this more fully with theory and other data sources--data obtained with other spacecraft such as the HINOTORI, P78-1, and ISEE-3 spacecrafts, and with the Very Large Array (VLA) and many other ground-based instruments. Many coordinated data sets, unprecedented in their breadth of coverage and multiplicity of sources, had been obtained within the structure of the Solar Maximum Year (SMY). o Stimulate joint studies, and publication in the general scientific literature. The intended primary benefit was for informal collaborations to be started or broadened at the Workshops with subsequent publications. o Provide a special publication resulting from this Workshop. o Provide a starting point of understanding for planning renewed full observations with the repaired SMM.