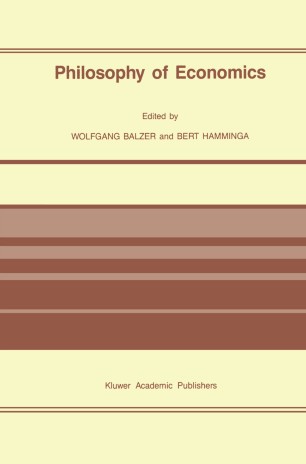 The last decade witnessed an unprecedented annual growth of the literature dealing with the philosophy of economics,as well as the first signs of an institutionalization (conferences, an international journal) of the philosophy of economics as a scientific subject in itself - in particular in the U.S. In 1981 a meeting took place with participants mainly of European "continental" origin. In July 1987, we organized a second conference "Philosophy of Economics II" at Tilburg Uni­ versity, The Netherlands, mainly aiming at the establishment of first contacts between the middle-European group and researchers from the U.S. The present volume contains the papers presented at this conference. Philosophical thought on economics in recent years split up in many different streams, two of which are represented in the larger part of this volume. The first of these streams was formed by a group of researchers mainly from middle-Europe, who make empirical studies of the logical structures of the different theories as they find them presented in economic literature. Two methods prevail here. First, the structuralist method, as exemplified in the writings of Sneed, Stegmiiller and others, of describing the object of a theory as a set of ("partial potential") models. Such models consist of sets and relationships between these sets, which represent the concepts used in the theory.