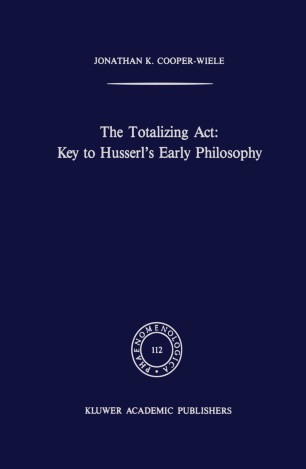 The Origins of Husserl's Totalizing Act At noon on Monday, October 24th, 1887, Dr. Edmund G. Husserl defended the dissertation that would qualify him as a university lecturer at Halle. Entitled "On the Concept of Number," it was written under Carl Stumpf who, like Husserl, had been a student of Franz Brentano. In this, his first published philosophical work, Husserl sought to secure the foundations of mathematics by deriving its most fundamental concepts from psychical acts.! In the same year, Heinrich Hertz published an article entitled, "Con­ cerning an Influence of Ultraviolet Light on the Electrical Discharge." The article detailed his discovery of a new "relation between two entirely different forces," those of light and electricity. Hermann von Helmholtz, whose theory guided Hertz's initial research, called it the "most important physical discovery of the century," and Hertz became an immediate sensation. He lectured on his discovery in 1889 before a general session of the German Association meeting in Heidelberg. In this lecture that, as he wrote beforehand to Emil Cohn, he was deter­ mined should not be "entirely unintelligible to the laity," Hertz explained that light ether and electro-magnetic forces were interdependent. He went on to tell his audience that they need not expect their senses to grant them access to these phenomena. Indeed, he said, the latter are not only insusceptible of sense perception, but are false from the standpoint of the senses.