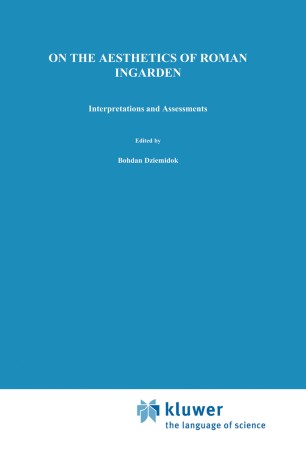 On the Aesthetics of Roman Ingarden

Roman Ingarden's very extensive philosophical work in metaphysics, ontology, epistemology, and aesthetics con­ tinues to attract increasing attention both in Poland and in North America. Further work left uncompleted at his death is appearing. Major bibliographies of his work as well as of studies about his work are now in print. Ingar­ den's scattered articles on various questions in philosophy are being collected. And conferences devoted to his work are now held regularly. These diverse activities might suggest a similar diver­ sity in Ingarden's philosophical legacy. But such a sugges­ tion would be misleading. For interest in Ingarden's work has continued to centre on the one area which is arguably at the core of his achievement, namely the complex prob­ lems of aesthetics. In this field Ingarden seemed to pull together his various interests in ontology and epistemology especially. Here he brought those interests to focus on a set of issues that would occupy him creatively throughout the vicissitudes of his long and difficult scholarly life. More­ over, aesthetics is also the field where Ingarden perhaps most succeeded in orchestrating the many themes he owed to his phenomenological training while finally transposing the central issues into something original, something dis­ tinctively his own that philosophers can no longer identify as merely phenomenological. Ingarden's aesthetics not surprisingly has captured the interest today of many scholars in different fields.