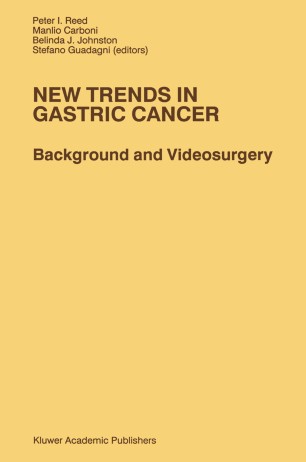 Part of the Developments in Oncology book series (DION, volume 59)

Despite the fact that the incidence of gastric cancer is declining in the Western world, it remains a significant problem with respect to accurate diagnosis and treatment since it has a high mortality rate. In June 1989 an International Conference was held at the University of Rome "La Sapienza" entitled "New Trends in Gastric Cancer: Background and videosurgery". During this meeting background information on the aetiopathogenesis of gastric cancer was presented together with talks and video presentations on the latest advances in the treatment of gastric carcinoma, both from the European and Japanese experience. Because of the poor prognosis of gastric carcinoma there is increasing pressure for early detection. Some of the problems in the early detection of gastric carcinoma are discussed together with methods of surveillance of high-risk subjects. It is generally accepted that the surgical approach to gastric carcinoma should take into account the site and extent of the lesion and there are chapters on new methods for pre and intraoperative staging of the disease which allow a more logical approach to surgery. A comparison between Japanese and Western rule and results was attempted and reasons for the differences were investigated. Since the field is still evolving not all aspects could be covered, and those angles not approached in this book will be addressed in a second International Conference to be held in Rome in June 1990.