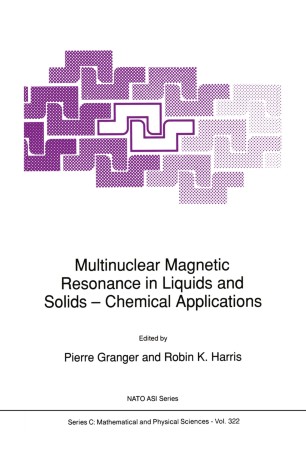 The idea of this NATO school was born during philosophical discussions with Dr Brevard on the present and future of NMR during a night walk under the palm trees in Biskra during a seminar held in this oasis. It was clear for us that the recent progress in the field of NMR, especially inverse spectroscopy and the development of MAS, was opening new perspectives for chemists. We realised also that organometallic and inorganic chemists were not clearly informed about the potentialities of all the new methods. NA TO, with its summer schools, was offering a good opportunity to propose to the chemical community a session where those problems would be largely developped. This School is then the prolongation of the two previous ones: Palermo in 1976 on "the less receptive nuclei" and Stirling in 1982 on "the multinuclear approach to NMR spectroscopy" . It was divided into two sub-sessions: NMR in the liquid state and NMR in the solid state. This is reflected in the book organization. As indicated by the title of this School, we were mainly concerned with the methodological aspects of multinuclear NMR. If many examples are given, they appear only as a support for the understanding of the theory or in explanation of some practical aspects of the different experiments. Each domain is introduced by a lecture which presents selected examples.