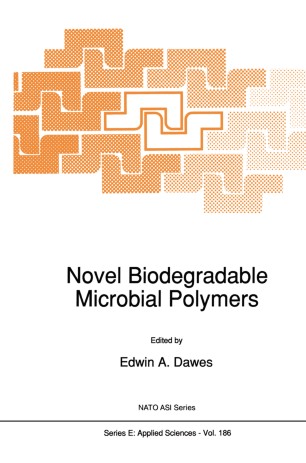 The NATO Advanced Research Workshop from which this book derives was conceived during Biotec-88, the Second Spanish Conference on Biotechnology, held at Barcelona in June 1988. The President of the Conference, Dr. Ricardo Guerrero, had arranged sessions on bacterial polymers which included lectures by five invited participants who, together with Dr. Guerrero, became the Organizing Committee for a projected meeting that would focus attention upon the increasing international importance of novel biodegradable polymers. The proposal found favour with the NATO Science Committee and, with Dr. R. Clinton Fuller and Dr. Robert W. Lenz as the co-Directors, Dr. Edwin A. Dawes as the Proceedings Editor, and Dr. Hans G. Schlegel, Dr. Alexander J.B. Zehnder and Dr. Ricardo Guerrero as members of the Organizing Committee, the meeting quickly took shape. To Dr. Guerrero we owe the happy choice of Sitges for the venue, a pleasant coastal resort 36 kilometres from Barcelona, which proved ideal. The sessions were held at the Palau de Maricel in appropriately impressive surroundings, and invaluable local support was provided by Mr. Jordi Mas-Castella and by Ms. Merce Piqueras. Much of the preparatory work fell upon the broad shoulders of Mr. Edward Knee, whose efforts are deeply appreciated. The Organizing Committee hopes that this Workshop will prove to be the first of a series which will aim to keep abreast of a rapidly expanding and exciting area of research that is highly relevant to environmental and industrial interests.