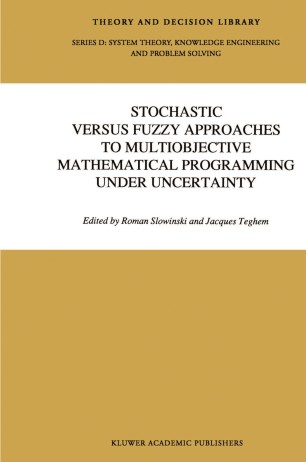 Stochastic Versus Fuzzy Approaches to Multiobjective Mathematical Programming under Uncertainty

Operations Research is a field whose major contribution has been to propose a rigorous fonnulation of often ill-defmed problems pertaining to the organization or the design of large scale systems, such as resource allocation problems, scheduling and the like. While this effort did help a lot in understanding the nature of these problems, the mathematical models have proved only partially satisfactory due to the difficulty in gathering precise data, and in formulating objective functions that reflect the multi-faceted notion of optimal solution according to human experts. In this respect linear programming is a typical example of impressive achievement of Operations Research, that in its detenninistic fonn is not always adapted to real world decision-making : everything must be expressed in tenns of linear constraints ; yet the coefficients that appear in these constraints may not be so well-defined, either because their value depends upon other parameters (not accounted for in the model) or because they cannot be precisely assessed, and only qualitative estimates of these coefficients are available. Similarly the best solution to a linear programming problem may be more a matter of compromise between various criteria rather than just minimizing or maximizing a linear objective function. Lastly the constraints, expressed by equalities or inequalities between linear expressions, are often softer in reality that what their mathematical expression might let us believe, and infeasibility as detected by the linear programming techniques can often been coped with by making trade-offs with the real world.