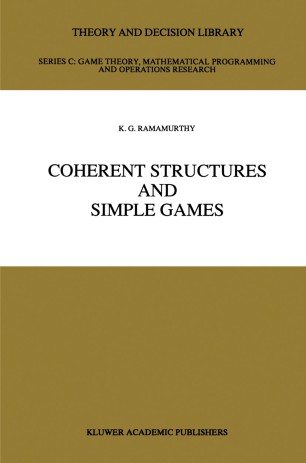 The motivation for this monograph can be traced to a seminar on Simple Games given by Professor S.H. Tijs of the Catholic University at Nijmegen way back in 1981 or 1982 at the Delhi campus of the Indian Statistical Institute. As an ap­ plied statistician and a consultant in quality control, I was naturally interested in Reliability Theory. I was aquainted with topics in reliability like coherent systems, importance of components etc., mainly through Barlow and Proschan's book. At the seminar given by Professor Tijs, I noticed the striking similarity between the concepts in reliability and simple games and this kindled my interest in simple games. When I started going deep into the literature of simple games, I noticed that a number of concepts as well as results which were well known in game theory were rediscovered much later by researchers in reliability. Though the conceptual equivalence of coherent structures and simple games has been noticed quite early, it is not that much well known. In fact, the theoretical developments have taken place practically independent of each other, with considerable duplication of research effort. The basic objective of this monograph is to unify some of the concepts and developments in reliability and simple games so as to avoid further duplication.