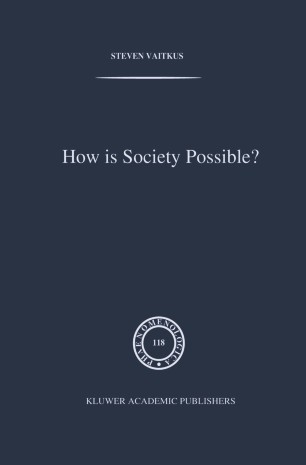 How is Society Possible?

Intersubjectivity and the Fiduciary Attitude as Problems of the Social Group in Mead, Gurwitsch, and Schutz

How is society possible? In Die Krisis der europiiischen Wissenschaflen und die transzendentale Phiinomenoiogie, I Edmund Husserl is found with a pathos send­ ing out pleas for belief ("Glauben") in his transcendental philosophy and tran­ scendental ego. The traditional idea of theoretical reflection instituted in ancient Greece as the suspension of all taken for granted worldly interests has, through a partial realization of itself, forsaken itself in the one-sided development of the objective mathematical-natural sciences as they themselves have become so taken for granted, with the method and validity of their results held as so self-evident, that they appear as resting self-sufficiently on their own grounds, while pursuing an increasingly abstract mathematization of nature. The sciences are left without a foundation and their meaning within the world consequently unintelligible, while their objective and valid abstract concepts continually tend to supercede the everyday life-world and render it questionable. In the end, these of belief in the everyday life-world or reflective evolving and exchanging attitudes doubt (science) ultimately leads to a disbelief in both, and a search in one direction for idol leaders and in the other for the cult of experience. This collapse of Western belief systems becomes particularly threatening as it turns into nihilism which is the development of beliefs in societal forms which employ 2 natural and social science for the liquidation of humanity and nature. Society starts becoming impossible.