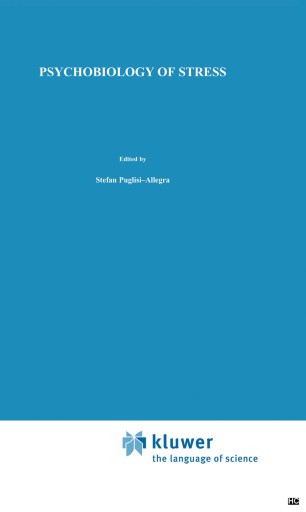 From a historical point of view the first studies on the response of the organism to stressful situations in general, and on the psychobiology of stress in particular, are probably those of Cannon and de la Paz, the physiologists who showed in 1911 that the adrenal medulla and the sympathetic system are involved in emergency situations. Cannon noted that the venous blood of cats frightened by barking dogs contained adrenaline, a response of the organism which was prevented by adrenalectomy or by section of the splanchnic nerve innervating the adrenal medulla. Cannon suggested that the adrenal medulla was acting in concert with the sympathetic nervous system, so that both systems were activated during stress. The role of the sympathetic system in response to stressful events was later emphasized by the experiments carried out by Maickel et al. (1967) and by Mason (1968): these authors clearly showed that stressors activate the sympathetic system causing it to release adrenaline and noradrenaline. This line of research may be contrasted with that carried out by Hans Selye, centered on of the adrenal cortex in the stress response. Selye's findings and theories originated the role the so-called hypothalamic - pituitary - adrenal cortex (HPA) model of stress: in short, during stress adrenocorticotropic hormone is released from cells of the anterior pituitary and elicits secretion of glucocorticoids from the adrenal cortex.