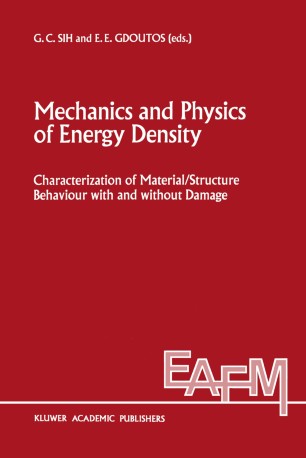 Mechanics and Physics of Energy Density

Characterization of material/structure behaviour with and without damage

Material technology has become so diversified in theories and the construction of novel microstructures that the researchers and practitioners are drifting further apart. This book is based on material presented at an International Symposium in Xanthi, Greece in July 1989. The symposium attracted a group of individual engineers and scientists from the East and West who tackled the question of why particular manipulations of a given material have particular effects. Emphasis is laid on the strain energy function because of the versatile role it plays in mechanics and physics. It has been used successfully not only in predicting the failure of solids but also in formulating constitutive relations in continuum mechanics.
The material presented falls within the areas of: Fundamentals of Strain Energy Density, Damage Analysis on Strain Energy Density, Strain Energy Density as Failure Criterion, Applications, and Composites.