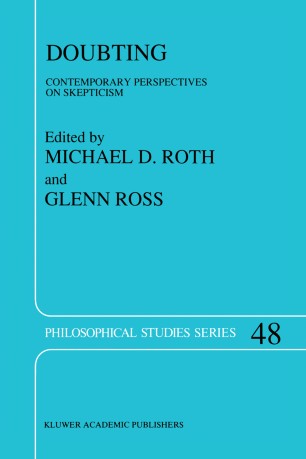 During the summer of 1986 one of the co-editors was a fellow at the Summer Institute in Epistemology held at the University of Colorado in Boulder. It was there that the idea for this volume was born. It was clear from the discussions taking place at the i Institute that works such as Robert Nozick's Philosophical Explanations and Barry 2 Stroud's The Significance of Philosophical Scepticism were beginning to have an impact and it was also clear that the debate over the issues surrounding skepticism had not gone away nor were they about to go away. Thinking that a new crop might be ready for harvest, the co-editors sent out a letter of inquiry to a long list of potential contributors. The letter elicited an overwhelmingly positive response to our inquiry from philosophers who were either writing something on skepticism at the time or who were willing to write something specifically for our volume. Still others told us that they had recently written something and if we were to consider previously published manuscripts they would permit us to consider their already published work. Out of all this material, the co-editors have put together the present collection. We believe that this anthology is not only suitable for graduate seminars but for advanced undergraduate classes as well.