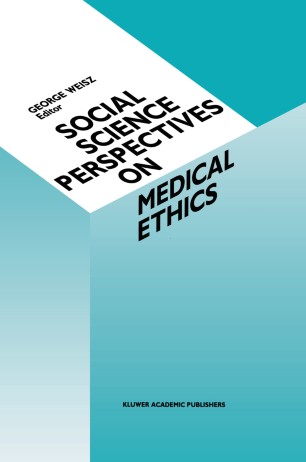 Medical or hio- ethics has in recent years been a growth industry. Journals, Centers and Associations devoted to the subject proliferate. Medical schools seem increasingly to be filling rare positions in the humanities and social sciences with ethicists. Hardly a day passes without some media scrutiny of one or another ethical dilemma resulting from our new-found ability to transform the natural conditions of life. Although bioethics is a self-consciously interdisciplinary field, it has not attracted the collaboration of many social scientists. In fact, social scientists who specialize in the study of medicine have in many cases watched its development with a certain ambivalence. No one disputes the significance and often the painfulness of the issues and choices being addressed. But there is something about the way these issues are usually handled which seems somehow inappropri­ ate if not wrong-headed to one trained in a discipline like sociology or history. In their analyses of complex situations, ethicists often appear grandly oblivious to the social and cultural context in which these occur, and indeed to empirical referents of any sort. Nor do they seem very conscious of the cultural specificity of many of the values and procedures they utilize when making ethical judg­ ments. The unease felt by many in the social sciences was given articulate expression in a paper by Renee Fox and Judith Swazey which appeared in 1984.