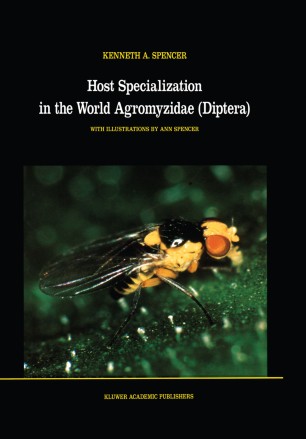 Phytophagous insects represent a very particular not really belong to their host plant range. This may group of organisms. Firstly, their number amounts lead to mistaken conclusions especially in regions to more than one quarter of all recent species (ex­ where only few observations were possible, as well cluding fungi, algae and microbes) and together with as in the case of uncommon insect species. Fourthly, the green plants on which they feed they form al­ the great majority (99. 4%) of the agromyzid species most one half of all living species described so far. studied show a high degree of host specialization Secondly, their overwhelming majority shows very which makes these insects especially suitable for narrow host plant specialization, that is they feed taxonomic-phylogenetic considerations. only on one or a few, mostly closely related plant With such an enormous amount of data, it may species, a characteristic that led J. H. Fabre to elab­ have been tempting to draw far-reaching conclu­ orate the notion of the 'insects' botanical instinct' a sions. However, the author has been very careful in century ago. doing this.