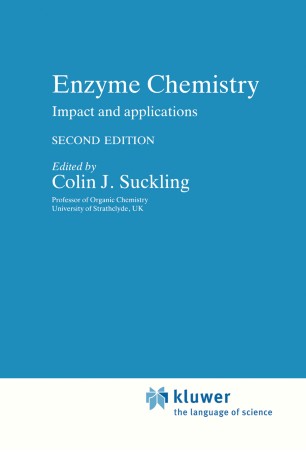 As the first edition of this book was going through the publication process, a revolution was taking place in the technologies available for the study of enzymes. The techniques of molecular biology, especially in genetic engineering of organisms and in site specific mutagenesis of genes, were established and were being brought into use to solve many problems in in enzymology. Added to these fundamental and applied science, not least advances the possibility of generating catalysts from antibodies has become a topic of major interest. These major innovations have changed the emphasis of much bioorganic research; whereas in the past, the protein was often the 'sleeping partner' ina study, its detailed function is now the major focus of scientific interest. Similarly in industry, the potential of genetically manipulated organisms to satisfy the needs for the production of chemicals and foodstuffs has been widely recognised. The second edition of 'Enzyme Chemistry, Impact and Applications' takes on board these new develop­ ments whilst maintaining the overall aims and views of the first edition. Many of the chapters have been completely rewritten to take account of advances in the last five years especially with regard to the impact of biologically based technologies. Although the book continues to approach its subject matter from the point of view of the chemist, the increased interdisciplinary content of much modern science will be obvious from the discussion.