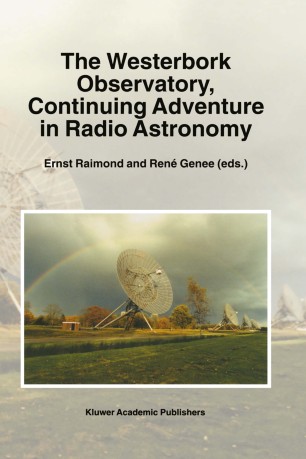 A small country builds a world-class telescope in its backyard and lives happily ever after (or at least for a quarter century). That in a nutshell is the story told in this collection of essays. The country of course is the Netherlands, and the telescope is the Westerbork Synthesis Radio Tele­ scope (WSRT), brainchild of Jan Oort. Living happily in this context is a continuing record of discovery and as such also a continuing basis for se­ curing observing time on facilities in other countries and operating at other frequencies. As our community celebrates the Silver Anniversary of the radio tele­ scope at Westerbork, it is fitting that we pause to take account of the scientific discoveries and insights it made possible. Initially the instrument represented the very significant step away from university-run, specialist facilities to a well-supported, common-user radio imager also having spec­ tral and polarization capabilities. It pioneered the mode of operation now common for satellite observatories, in which data is taken and calibrated by technicians and provided to researchers ready for analysis. It has been a major source of discovery in, among other areas, research on neutral hy­ drogen and studies of dark matter in galaxies.