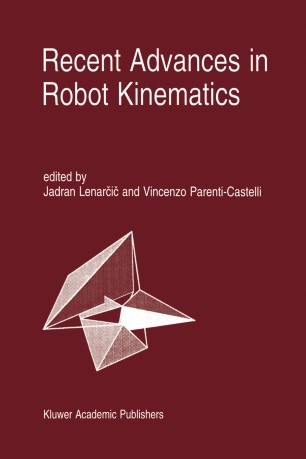 The articles of this book were reported and discussed at the fifth international symposium on Advances in Robot Kinematics. As is known, the first symposium of this series was organised in 1988 in Ljubljana. The following meetings took place every other year in Austria, Italy, and Slovenia (Linz, Ferrara, Ljubljana, Portoroz­ Bernardin). It must be emphasised that the symposia run under the patronage of the International Federation for the Theory of Machinesand Mechanisms, IFToMM. In this period, Advances in Robot Kinematics has been able to attract the most outstanding authors in the area and also to create an optimum combination of a scientific pragmatism and a friendly atmosphere. Hence, it has managed to survive in a strong competition of many international conferences and meetings. In the most ancient way, robot kinematics is regarded as an application of the kinematics of rigid hodies. However, there are topics and problems that are typical for robot kinematics that cannot easily be found in any other scientific field. It is our belief that the initiative of Advances in Robot Kinematics has contributed to develop a remarkable scientific community. The present book is of interest to researchers, doctoral students and teachers, engineers and mathematicians specialising in kinematics of robots and mechanisms, mathematical modelling, simulation, design, and control of robots.