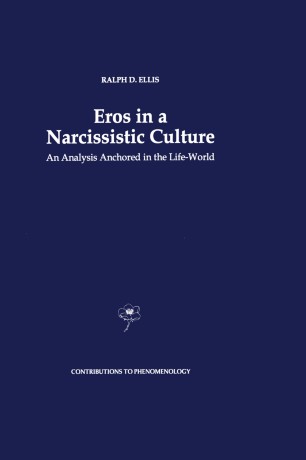 Eros in a Narcissistic Culture

An Analysis Anchored in the Life-World

Part of the Contributions to Phenomenology book series (CTPH, volume 22)

The Urgency of Changing Our Thinking about Eros In Atlanta recently, a man broke into the apartment of his former girlfriend and brutally murdered both her and her new lover with an axe. When asked later whether he had considered the consequences of being apprehended and prosecuted, he responded that without his relationship to this particular woman his life had no meaning, and for this reason it made no difference what happened to him. All-too-facile explanations of such events can be devised in terms of neurological imbalances or improper child-rearing practices. But why are suicide, the murder of spouses and lovers, and other crimes of passion so much more prevalent in advanced, urban-industrial cultures, and especially in those where people's value is assessed in terms of socio-economic success and failure? And why do the associated psychic disturbances express themselves so prominently in terms of disruption of attitudes toward love relationships? It cannot be a mere coincidence that the most heinous crimes are crimes of love. I shall suggest here that the most direct way to understand the most prevalent dysfunctions of the modern psyche is to understand the dysfunctions of eros. The reason for this is twofold. First, eros is central tQl the project of defining meaning for conscious beings - for reasons more fundamentally philosophical than anything envisioned by Freud or other drive-reduction theorists.